Do you consider yourself an active citizen of society? By what standards? What does it mean to be active? As Tullio explained, to be an active citizen does not mean you have to be a revolutionary. Being active starts with being aware, and then you can act upon that awareness through the smallest actions, like don’t throw rubbish on the floor, give up your seat for those who need it more, and so on.

After pulling Brett out of duty-free (we flew here from Izmir) and Pawel + bucket list out of Rome (because ‘when in Rome’), we finally arrived in Napoli, accompanied with a free glass of champagne in the beautiful and comfy Frecciarossa, Italy’s high-speed train; Five stars, without a doubt. The background music provided by a choir of comrades at the station’s public piano? Also cinque stelle. The state of Civic Education? I’ll come back to you about that… 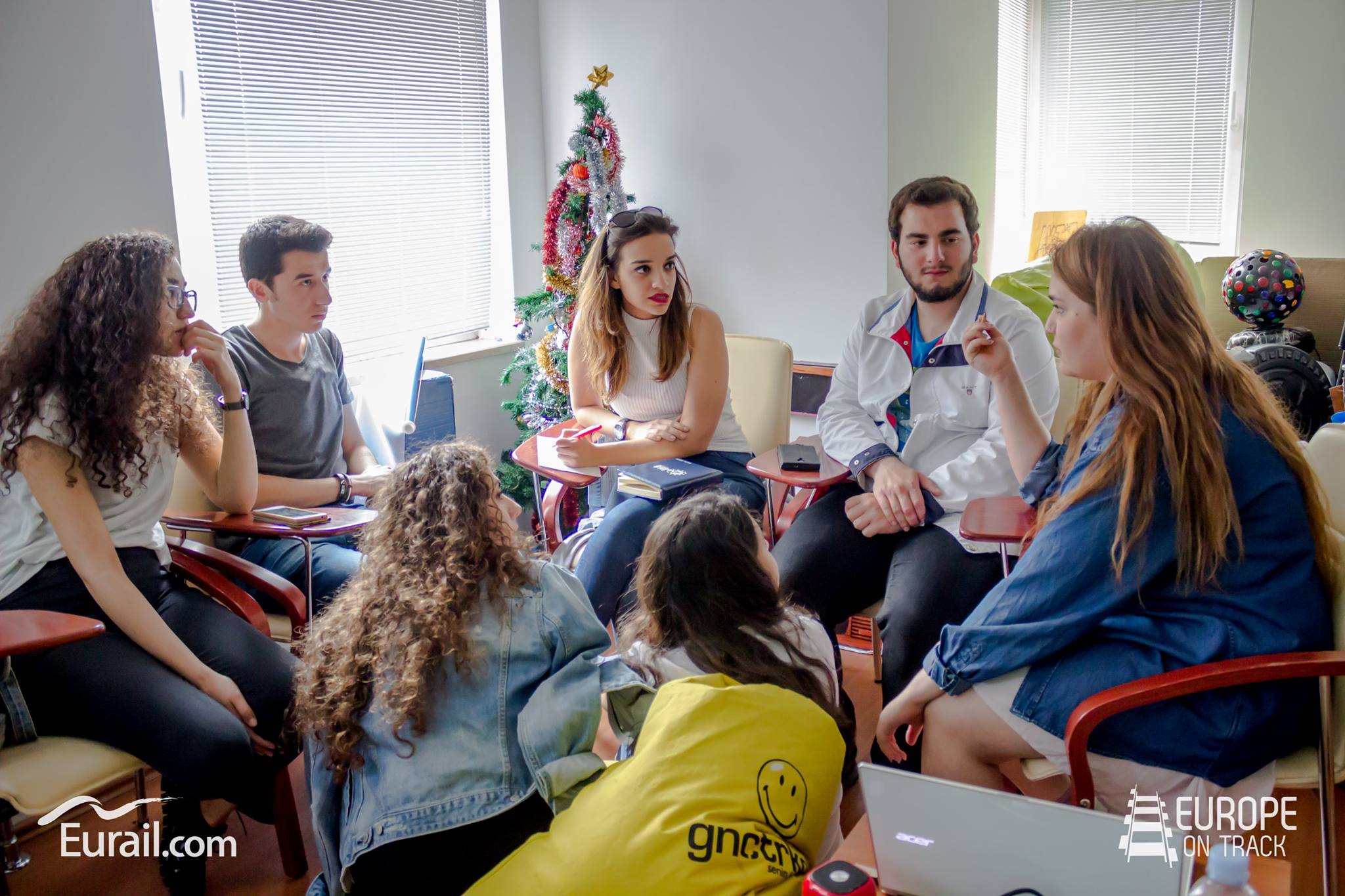 In Napoli, we were hosted by the one and only (or not only?) project leader of Europe on Track: NICOLA. After having survived the many Vespa’s, invisible zebras (Nicola just pretends they are there and starts crossing the road anywhere) and stairs that lead to Nicola’s home, we were welcomed by Sofia, Nicola’s parents, a cute cat, and (can it get better than a cat?)… the Italian kitchen. We walked to the square nearby, which is fortunate since I was told that the square (where people in Napoli go) changes every four years. There I met an old man who, upon hearing my name, told me all about Eleonora d’Aragona who was an important political figure in Naples in the 15th century, during a time when it was considered extremely rare for women to be praised highly for their political knowledge. A nice personalized introduction to the city and its history, indeed.

But, again, to be active does not mean you have to be a revolutionary. Nicola planned a side-project connected to Civic Education: we were going to visit three formerly abandoned spaces that people then occupied to transform them into public spaces for social change. A bit of a mouthful. Let me explain. You see, in Napoli, there isn’t really a common understanding of the public good. As Roberto explains, “It’s a culture of ‘Mind your own business.’ It’s wrong. You’re not told that your own business is actually everyone’s business. Is this pavement not mine? Ok, then I don’t care. The concept of property, not public space, is what you are taught to care about.” This entrenched mindset is manifested in behaviors of nepotism and corruption and a huge and inefficient bureaucracy – although that may be a chicken or the egg dilemma. Roberto continues, “People need to understand what a society is. And that a society is made for them. So Civic Education is not just knowing what a democracy is or something, but understanding what a society is. Most people in Napoli don’t understand the concept, they just act what is the best for them and their closest relatives. Even your wife is too far away from you. You just care about your mom and your brother. This brought many cities here to be underdeveloped. But it’s changing now as people, especially young people, are feeling the pain that comes from this mentality.” Tullio also notices this change, “The bureaucracy here is huge. If you have a project, you cannot do it. People miss the awareness that we can actually do something if you organize altogether. This process is starting in the past years. Napoli was worse 10 years ago. Now things are changing, like the occupied spaces we have seen. People are getting together to do something.”

This is also where the importance of non-formal/outside of the classroom Civic Education enters the scene. During the workshop we gave, we were told that Civic Education is actually a school subject in Italy, taught at a very early age, but it is mainly focused on the constitution, and very few people remember what they learned later on. As Roberto explains, “We never got in-depth with Civic Education. But my teachers were good people. So people can make you feel something through their lessons. You don’t have to explicitly teach Civic Education, to make people understand something about it. You can teach them Greek and Latin and be an honest and wise person, with those values.” In the same way, certain aspects of Civic Education, such as teamwork dynamics and respect, can be taught through drama lessons or by playing soccer. So, back to the occupied spaces. These spaces used to serve different functions as for example military hospitals, convents or juvenile prisons, but at some point, they closed down and became abandoned. People (read: normal citizens) saw an opportunity here and grouped together. Different grassroots initiatives were founded all over the city, including Scugnizzo Liberato, Ex OPG Occupato Je So’ Pazzo and Lido Pola, where they now host many free classes, workshops, theater shows, and more, creating close-knit communities and micro-societies, with people of all kinds of backgrounds and without any external funding. As they showed us around, we conducted in-depth interviews that we will edit into a short film this summer so we can spread the word of this wonderful example of Active Citizenship, so stay tuned!

I should also stress the fact that these successes were not achieved without any challenges or setbacks; To put yourself out there and to start (and continue!) something is really hard. It requires teamwork and dedication, hope and determination. A shared goal. The gap between the bottom-up initiatives (these spaces) and top-down forces (authorities like the city council or big investors who want to build more clubs) has fortunately decreased a little bit, as the city council has now recognized and acknowledged some of these initiatives, which is a very positive sign. The municipality is now also working on one of these spaces, as a long-term project of 10 years, in collaboration with other cities across Europe through URBACT, a European exchange and learning program promoting sustainable urban development. Since both approaches (top-down versus bottom-up) have their own benefits and limitations, the municipality tries to ‘take the best of both worlds’ by inviting many different stakeholders (and especially the people) to the decision process, through ‘open space technology’, a certain approach to hosting meetings for convening groups that set their own agenda around a central theme of strategic importance. The municipality is still in the first stages of the project but we are curious to see how it unfolds over time.

All in all, Napoli seems to be going in the right direction. Despite all the things that are happening now (*cough* Brexit and Italian referendum *cough*) and all the gaps that are widening, we have to keep in mind that, as Roberto points out, “things like Brexit are not going against but in favor of the progress of Europe. Now there is proof that going out of Europe sucks. Before, there wasn’t. Now people are like ‘Really? Did you look at the UK?’ I think in 10 years, the UK will be back, as the people that will be leading the UK in 10-20 years, they are our friends. And we are all the same. All the youngest parts of the population voted to stay in the European Union. When they get power, they will be back.”

During our three days in Napoli, stuffed and spoiled with Pizzas and Pastas (how did I not mention these yet), limoncello, sunsets, beautiful metro stations, gelato and more, we got to learn and see so much about this city and how and why it is different from the North, the parts of Italy we (Team Red) were personally more familiar with. Thank you for the hospitality, the knowledge-sharing, and the aspiration. Thank you for taking action. See you somewhere in Europe!