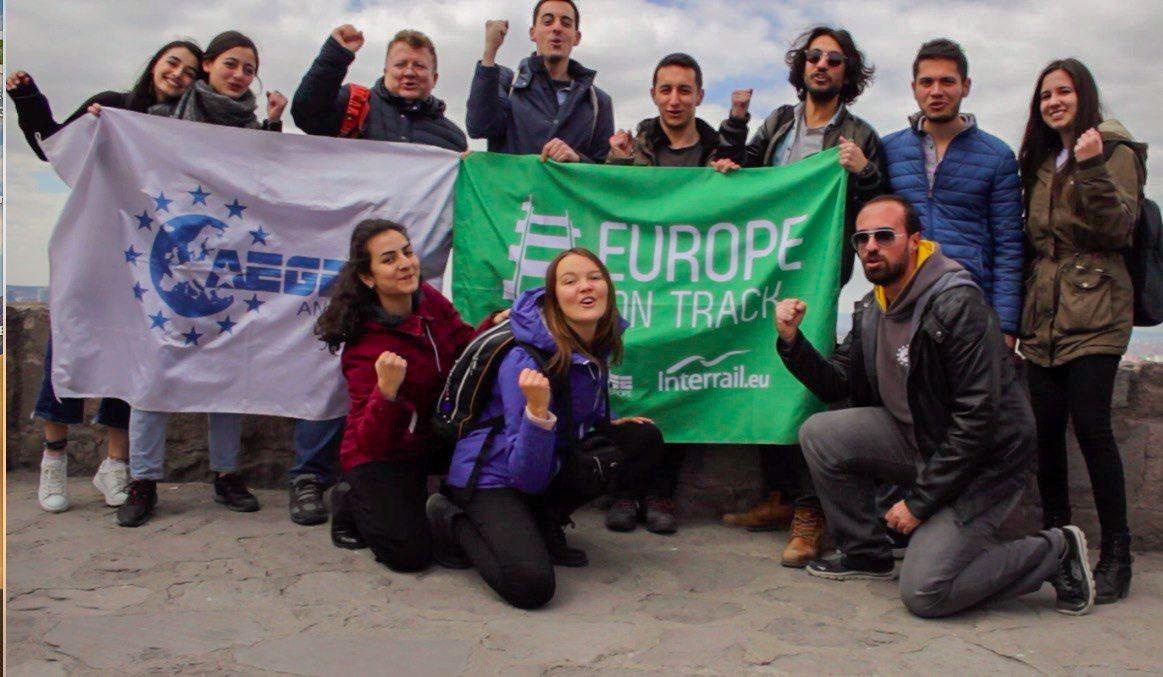 The time has come! The #RedTeam of Europe on Track has already finished its first stop in the springing metropolis of Ankara! Following a short ride from Istanbul, we Ambassadors were already set to begin our work in the capital city of Turkey. The first morning began with a Turkish breakfast AEGEE-Ankara style, which gave us the necessary energy to start our city tour visiting the Anıtkabir, also known as the Mausoleum of Atatürk – the founder of the modern Republic of Turkey -, as well as the Ankara Castle, where we travelled back in time a couple thousand years. Needless to say, local organisers gave us all kinds of interesting insights both at the tour and during our whole stay, and were a clear example of Turkish hospitality.

Once the city tour was over, our team was ready to begin the content part of our stop: workshops! Altogether we covered three topics during our stay in Ankara: youth participation, youth mobility, and, especially, migration. The first of our workshops was on youth mobility with the members of AEGEE-Ankara. The topic was particularly meaningful in Turkey, as we tackled the Schengen Agreement and visa issues in Europe. One of the main outcomes of this workshop was the fact that although the Schengen Area is characterised by soft internal borders, it is equally represented by its hard external borders, a reality for hundreds of AEGEE members residing on the other side of its limits. The following day our team held a workshop on migration, organised within an event from AEGEE-Ankara involving as well a panel discussion covering the topic of refugees in Turkey. Finally, youth participation was delivered the last day of our stay in a high school of the Turkish capital.

As previously mentioned, the topic of migration was one of the highlights during our time in Ankara. Since the panel discussions granted us with an opportunity to do so, we interviewed Mr. Omar Kadkoy, one of the speakers, who is working on the political and socio-economic dynamics of Syrian refugees in Turkey. When asked whether young Syrian refugees have the opportunity to make their voice heard in Turkey and Europe in general, Mr. Kadkoy expressed how youth on both sides are actors of change and social cohesion, yet the general European public usually acts from an ivory tower, determining who is in need and what is needed without a real people-to-people dialogue between locals and displaced people. Dr. Emel Özdora Akşak, also a speaker at the panel, underlined the need of, in an environment of ever-growing fake news and disinformation, instead of talking about asylum seekers, talking with asylum seekers and getting to know their own perspectives.

The so-called refugee crisis is undeniably one of the most controversial topics in current European political discourses. This applies to the majority of countries in Europe,  such as Estonia – hosting currently 47 refugees – or Germany – hosting currently more than one million. However, when looking at the numbers there is a clear misbalance with regard to the amount of refugees hosted by different countries. An eye-opening statistic provided in the panel discussion highlighted the ratio of refugees per citizens in various countries. When it comes to Lebanon, a country with 4 million citizens hosting 1 million refugees, the ratio is an astonishing 1:4. In Turkey the ratio goes down to 1:23. In the European Union? 1:518. Some food for thought.

One of the cornerstones of this project will be the fact that we will be conducting several interviews to young people in each of the stops, in order to capture their opinions on topics of relevance for the European youth. Interestingly enough, when asking about borders in Europe one of the respondents in Ankara stated that “physically there are no borders, but mentally and culturally there are”. Another respondent highlighted – this time in the line of physical borders –  the fact that within the European Union there are no visible borders, whereas between Turkey and other countries there are “huge gates and lots of security”. If you want to know what young people in Eskişehir think, and what our adventures in the city will lead us to, stay tuned for our next article!

2 thoughts on “Team Red in Ankara: an insight on the migration situation in Turkey”