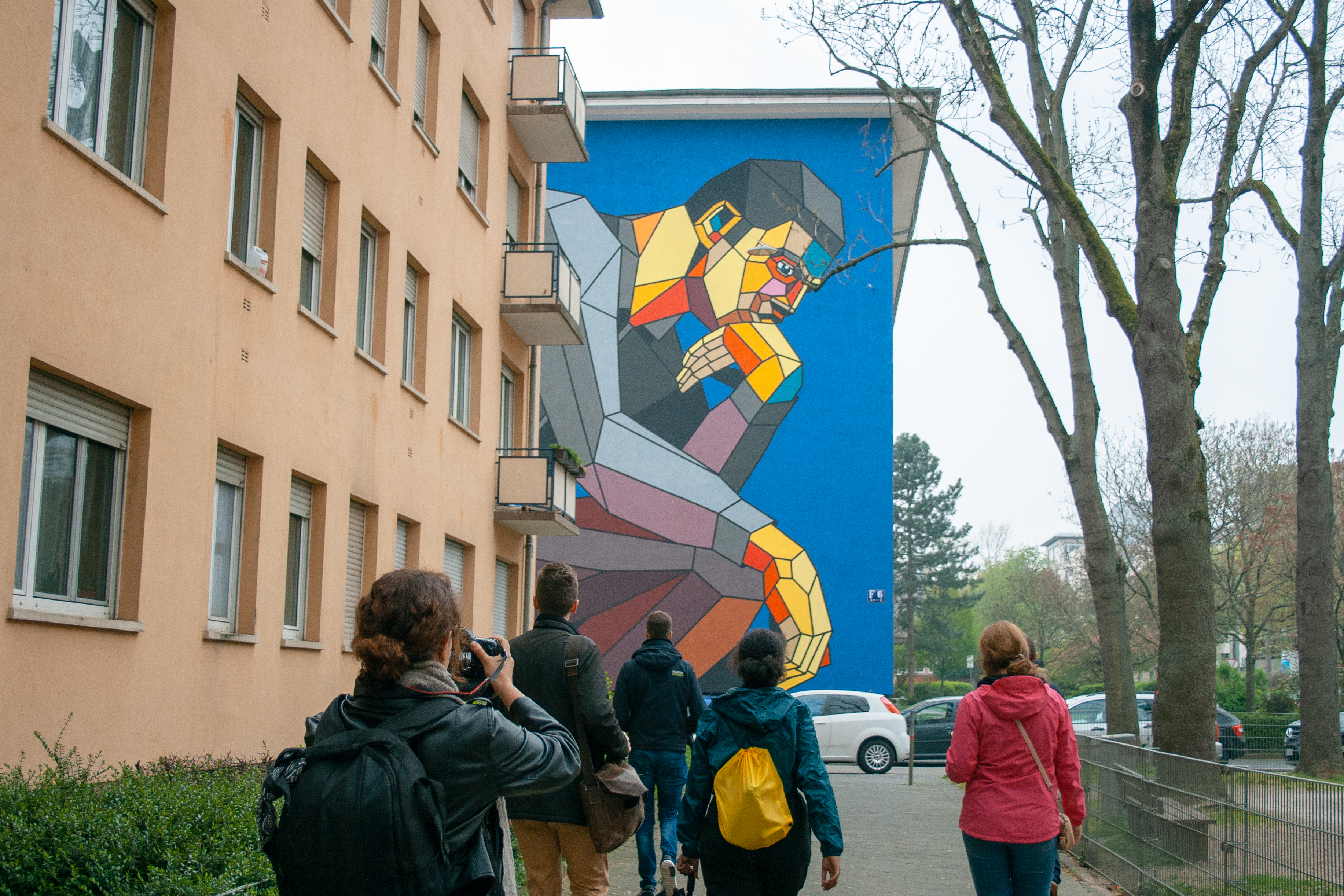 #TeamBlue made it to the Quadratestadt Mannheim! The stop started a city tour in cooperation with the Mannheim’s Free Walking tour. While exploring the city our team recognized a couple of street artists which is pretty crazy considering that we’re from three different countries. Art connects. After our trip, we deserved ourselves a traditional dish of “Käsespätzle” which the lovely antenna prepared in the meantime. As a dinner guest Dr. Michael Reuther (50) who is running as an MEP for Volt in Germany joined us. On the website, Volt describes itself as a “pan-European progressive political movement, focused on changing the way politics is done and shaping the future of Europe! A movement committed to strengthening the Europe we all share“. Interestingly enough he used to be the president of AEGEE-Heidelberg when he was student, having joint in 1989, the year of the fall of the Berlin wall looking for an opportunity to be involved in Europe, as he felt as if the fall would be the trigger for Europe to come closer together. Topics that he considers to be relevant for young people are unmissable climate change and furthermore, young people in the AEGEE age are usually looking for a place in their life. Therefore education and professional life are central topics.

The development from being the antenna’s president to becoming an MEP candidate wasn’t a straight line for him. He studied Astronomy and Physics and most of his life his job was in a quite different direction. “My interest for Europe and my European identity are the only straight lines that brought me to this place”. He explains that a lot of time between his presidency and candidates happened, the political landscape changed in Germany and in Europe and eventually, he felt like as if he didn’t do something right now, he would feel like he would miss out on something he should really do. “I have a seven-year-old daughter”, he continues, “and I try to imagine, what would I tell her If she asks why I didn’t do something to change the course when there was time to do so. That’s I’m active again. And as I already had European roots, it wasn’t too difficult to think about what I could do”. When we talk about different forms of youth participation and the rising participation in protests he highlights the importance of voting and standing up engaging oneself. “If you ask me about what more young people could do? It’s important that they directly involve themselves in political parties, we need young people to be candidates. And I hope that Europe after the elections is going to be the role of young people. We fear that there is going to be a big group of right-wing populists in the European Parliament and that needs to be addressed. They need to raise their voice, be present in politics and society and say what kind of Europe they want”. Mannheim’s university Prof. Dr. Thomas also sees a threat in the rise of established populist, but he highlights that threats eventually triggers action. During the conference Euroscepticism & visions for Europe organized by AEGEE-Mannheim he advocated that when ideas are discussed publicly they change political agendas. Looking at Germany and he sees the root of lack of participation rooted in parties without agendas. Merkel, from his point of view, is the embodiment of lack of action, as she’s in the middle of the party spectrum without a program. Moved she could only be by a threat and he envisions a system, where citizens actively demand. And demand so loud that parties have to have an agenda. Speaking about the institution we’re sitting in in that very moment he raises the point that throughout decades there has been a decrease in investment in education and universities. Thinking about the German socialist party (SPD) whose votes are decreasing he proposes that party should profile should take leadership in investing in supporting people that live in poverty. People should demand these investments and also the investment is needed to encourage participation and combat exclusion through technocracy.

On our last day we went for that – investing ourselves and time to talk to high school students about their local challenges and to brainstorm on how to make our voices heard.

3 thoughts on “Team Blue in Mannheim: From being an AEGEE president to running as an MEP”